This page is available in English only 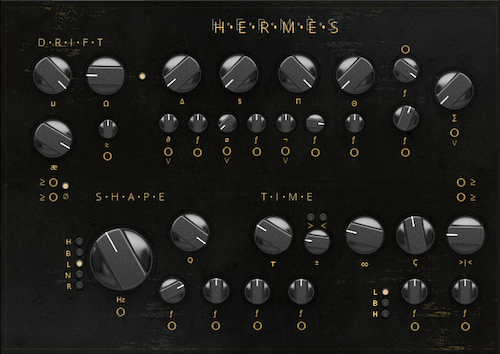 HERMÈS is where words and oscillations coincide and disrupt. It stands between alchemy and science; witchcraft and technology; ataraxia and pandemonium.

It has, however, a few twists and tricks up its sleeves. It is meant to be fed back onto itself; to live and move subtly or aggressively. All three aspects can generate self-oscillation and become sources of sound generation, and they all can modulate each other.

HERMÈS can also process incoming audio via the two inputs on the left, which are fed into a VCA shaped by envelopes triggered by DRIFT (aka the oscillator), thus making it a gater/AM/ring modulator effect.

HERMÈS comes to spew out messages, some soothing and others beyond control.

It is all up to you, as you are the alchemist who controls the interface.

Note 1: Some sounds coming out of it can be harsh/loud sounding. It won't overload, but still wanted to give you a fair warning that it's, uh, chaotic, to say the least. Check the sound samples beforehand to see if it will work for your music-making...!

Note 2: The .ism file is suitable to use HERMÈS as a Block in the Rack context; however, you cannot feedback it onto itself without using an additional module (a mixer or a mult would probably work for this). That is unfortunately a limitation of the Rack format (no module can loop back onto itself by itself).

Manuel Contreras
9 months ago
Dope... Thanks !

Laszlo Bolender
9 months ago
Glad it'll be getting some use interaction! If you're on IG and using it, send me some videos! My IG is @trianglewaverecords :-)

sam eddy
9 months ago
great! thanks

Paule
9 months ago
Thank you, László.

Laszlo Bolender
9 months ago
Glad you like it, Philippe!

Philippe Loiseau
9 months ago
nice one, thanks